An Analysis of Dr. Faustus as a Renaissance Drama 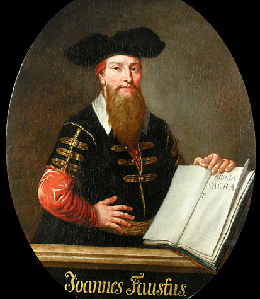 Dr. Faustus is a typical Renaissance rendering of the great story of Faustus’s damnation for knowledge infinite. Marlowe took the story from German Faust Book and endowed it with a new attitude. The original story, as narrated in the Faust Book, was only a tale of magic and enchantment. In that tale Faustus was depicted only as a simple magician and hence he could arouse no sympathy in the heart of the readers. But this simple tale of Faustus becomes a tragedy in the hand of Marlowe.

The very chorus in Marlowe’s Dr. Faustus sets the tone of the play. Faustus who has already mastered various subjects like theology, divinity, law and medicine etc. is not satisfied with the kind of knowledge he has already achieved. He tries to acquire limitless knowledge and power which in reality beyond the petty possibility of any human being in the universe. So he takes the study of necromancy and starts his career as a magician.

Act-I of the play exposes Faustus’ yearning for limitless knowledge, his hankering after sensual pleasures of life, his excessive ambition, his supreme lust power and revolt against medieval ethical and religious principles. All these new principles of Dr. Faustus are manifestations of the two main ingredients of Italian Renaissance – individualism and worldliness. In fact, Christopher Marlowe himself was a product of the Renaissance. Hence Dr. Faustus can rightly be called a typical Marlowian hero. His first hero Tamburlaine represents conquering power, while Barabas represents the power of wealth. In Faustus we find a kind of ambition which is even greater than that of Tamburlaine in “Tamburlaine the Great” and Barabas in “The Jew of Malta”. The following words of Faustus are indicative of his sky soaring ambition:

“I w’ll have them [spirits] fly to India for gold

Ransack the ocean for orient pearl,

To achieve the ‘world of profit and delight, of power, of honour, of omnipotence’ Faustus makes compromise with his life. But eventually the mind and heart of Faustus become a spiritual battleground where the forces of good and evil try to overwhelm each other. In rejecting medieval Christian values, there arises in his mind a deep conflict between the pull of tradition, the Will of God and his desire to learn more and more to taste the fruits of forbidden tree. Faustus who abjures scriptures and blasphemes the Trinity is always in fear of Him and tremblingly awaits death and hell. Faustus cries out after his first success in magic in the following words:

“Had I as many souls as there are stars

I’d give them all for Mephistopheles”

But very soon Faustus finds himself in a mess because of his hopeless desperation of transcendental thoughts in one hand and his desire to revert to his medieval belief.

Throughout the play, Faustus staggers between doubt and faith symbolized by the warnings of the Good Angel and seduction of the Evil Angel. But he cannot avoid the mental tortures that must follow every act of sin and crime. A guilty conscience pricks him almost from the beginning to the end of the play.

Marlowe makes Dr. Faustus the representative of his age. In the audacity of his desire and in the luxurious abundance of his imagination, the magician becomes a symbol of a Renaissance man. It was an age of fresh wonders of the mind in search of “a world of profit and delight, of power, of honour, of omnipotence”. The dramatist conceived a world which is free from all religious and moral codes and where man can get maximum strength and enjoyment by way of impiety, sensuality and crime. But in so doing he constantly felt the horror of his denial and blasphemies. Marlowe himself was a lonely atheist in a Christian world. All the time he was afraid of the fact that heaven might fall and crush him. This is the feeling expressed by Faustus in the last scene of the play

In this way, Dr. Faustus is a Renaissance drama. But a war between medievalism and Renaissance ideals is present throughout the play. The beauty of the play also lies herein.